After capturing gold medals in four individual events at a conference track meet, most standout athletes would call it a day and head home to relax.

Not Addie Lawrence. Her day was far from over.

Those four victories played a key role as College Heights captured the team championship for the second straight season.

But after a long day at the track, Lawrence didn’t head home. She still had work to do.

In fact, before the meet had even concluded, Lawrence and several of her teammates changed uniforms and departed for a softball game across town.

For Lawrence, it was all in a day’s work—she’s been standing out in both track and softball this spring.

“It’s been really stressful at times, but it’s also been a lot of fun,” Lawrence said of pulling double duty. “I’ve made a lot of new friendships and relationships by doing both sports, but it’s been a lot on my shoulders. I’m always busy. After school, I either have a game, a meet or a practice. As soon as I get home, I have to do my homework. It is a struggle at times.”

Lawrence, who said she’s had a passion for both sports since elementary school, has put together a stellar junior campaign on the track, dominating in her events. 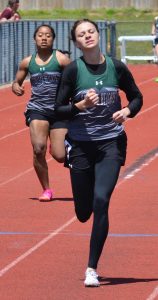 Simply put, she’s picked right up where she left off last year.

Lawrence turned a lot of heads and opened a lot of eyes last spring with her dominance on the track.

Lawrence claimed individual state titles in the 100 and the 400 while also anchoring CHC’s winning 4×100 and 4×200 relays with Jayli Johnson, Allie Fiscus and Lauren Ukena.

“It was amazing,” Lawrence said of last year’s state track experience. “It was a lot of fun competing with the girls and having that success. It was just a great day.”

Lawrence, who has won nearly every individual event she’s competed in this spring, hopes to repeat last year’s postseason success on the track.

“I want to try to repeat, but whatever happens, happens,” said Lawrence, who also plays volleyball and basketball at College Heights. “I’m going to have to put in a lot of extra work and focus.”

Lawrence has also played a big role for the College Heights (with McAuley) softball team. The Ozark 7 champion Cougars currently own a record of 18-4.

A center fielder who earned all-conference and all-district honors a season ago, Lawrence is currently batting .392 with 29 hits—14 singles, nine doubles, four triples and two home runs predominantly out of the third hole in the lineup. She’s driven in 42 runs, scored 25 times and stolen 20 bases. Lawrence has a .895 fielding percentage.

Of course, Lawrence isn’t the only athlete from CHC or McAuley that’s competing in multiple sports this spring. But she is the lone defending state champion in an individual event that’s pulling off the feat.

The postseason is set to begin in both sports.

In softball, College Heights (with McAuley) is the No. 2 seed for the Class 2 District 6 tournament. The Cougars will meet seventh-seeded Southwest at 5 on Friday in Mount Vernon.

One day later, Lawrence and her teammates will compete at the district track meet in Sarcoxie.

The arrival of playoff games and postseason meets means another busy stretch is ahead for the CHC standout.

But if you ask Lawrence, she’ll tell you she wouldn’t change a thing.

“I think it’s been worth it,” Lawrence said of her busy spring. “Both seasons have been a lot of fun, we’ve done well and I’ve had a great time with all the girls. It’s been a struggle at times, but you’re only in high school once.”