BOLIVAR, Mo. — Emree Cameron was on the precipice of a monumental achievement.

A Nevada High School sophomore, the 15-year-old Cameron concluded with a runner-up finish at the MSHSAA Class 2 Girls Golf Championships on Tuesday.

With Silo Ridge Golf Club serving as the backdrop for the marquee two-day event, Cameron dazzled with a sparkling opening-round performance on Monday, emerging with a 1-stroke lead over reigning state champ Marlene Edgeman.

A showdown between two of the state’s premier prep golfers heated up an event played in inclement conditions. Monday featured wind-gusts of 25 to 30 miles per hour, followed by temperatures plummeting to near-freezing on Tuesday.

Despite the hard overnight freeze, on Tuesday, the links were otherwise in perfect playing condition. It was familiar terrain for Cameron, as one of her five first-place finishes on the season came at Silo Ridge.

“It’s a really well laid-out course,” Cameron told SoMo Sports. “It was a good choice for the state tournament.” 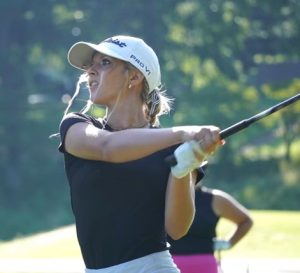 Cameron came out scorching on day two, stretching her advantage to three strokes after dropping in birdies on two of the first three holes.

Cameron missed an opportunity to widen her lead to four, bogeying the par-5 fifth hole, while Edgeman knocked in a birdie to slice her deficit to two.

“That was definitely one of the turning points,” said Nevada coach Brian Leonard.

Edgeman, a Marshfield junior, later recaptured the lead with a dramatic eagle from 138 yards out on the par-4 13th. Cameron followed with a bogie, as the stunning turn of events catapulted Edgeman to a two-stroke advantage.

“I was flustered after her shot rolled in for eagle. That made her very confident,” Cameron said. “She stayed strong and I couldn’t catch her.”

Edgeman left the door slightly ajar with a bogey on the par-3 17th. Cameron was unable to capitalize, also bogeying. With a par on the 18th, Edgeman sealed the victory.

“I’m happy with the second-place finish, but not satisfied,” Cameron said.

After the dust settled, Edgeman had successfully defended her crown with a two-day total of 144, shooting an even-par 72 on both days. Cameron fired an opening-round 1-under-71, followed by a 3-over-par 75 to close out with a 146.

Leonard said Cameron should have been more conservative with her putting on day two, as Edgeman was closing the gap.

“She ran a few of her putts four or five feet past the hole,” Leonard said, which included the game-altering 13th green, as well as hole No. 9. “The way they were (both) playing, all Emree needed was pars right then.”

Despite the setbacks, Leonard said he instructed Cameron to just play her game.

“Don’t let anyone else’s game influence you. Just let it go and play your game,” Leonard said of the pep talk.

While Cameron is a certified star at the high school level, Leonard said she still needs to work on her mental approach.

“She was (resigned) to second-place, and said ‘I’m not going to win this,'” Leonard recounted after Edgeman’s eagle. “I told her ‘Just stop right now, we still have several (holes) left — so just calm down.’ It’s the mental side of the game. She has to learn to control those feelings, and I think that’s going to come to her.”

Cameron rolled in birdies on three of the first four holes to open the tournament, en route to the only under-par round of the tournament.

Leonard called it the best overall round of any competitor at the event. Cameron’s efforts included 10 pars and five birdies — while grappling with heavy wind gusts.

“I was feeling good,” Cameron said. “Marlene also had a good round and stayed close.”

Cameron was particularly potent with her putter.

Cameron said putting is the area that she made the biggest stride in during her sophomore campaign, attributing that to hard work during the summer months.

“I was sinking a lot of putts on the first day,” she said. “However, on the second day, I didn’t get too lucky.”

Cameron’s focus will now turn to CrossFit training. CrossFit is high-intensity functional fitness and interval training that incorporates elements from several sports, and types of exercises. Cameron is gearing up for a showcase CrossFit event next spring in Columbia. She said the training regimen translates to success on the links.

“It helps build my endurance,” she said. “Golf’s not my only thing — I also have CrossFit.”

Cameron typically takes a complete hiatus from golf for a six-week period over the winter months, focusing exclusively on her training program.

“It gives her a way to compete at something else other than swinging a golf club. It’s a little bit of an outlet,” said Cameron’s father, Eric. “She’s an athlete and has that competitive itch.”

Upon returning from her break, Cameron plans to compete in multiple events via the American Junior Golf Association.

UP IN THE AIR

While Cameron still has her junior and senior seasons remaining to earn the coveted state crown, it’s possible that it may never happen due to her availability.

As a freshman a season ago, Cameron’s opportunities for outside tour events were limited for the first time.

“We feel like last year when she played high school golf her game regressed a little bit,” Eric said, “because it took away her normal training routine for her national tournaments.”

“We didn’t know whether she would play high school golf going into the season,” Eric said. “It was a tough decision to make.”

To off-set the imbalance, Cameron set a goal to double her practice workload from that of her actual high school practice schedule.

“And I feel like her game did not regress this year like it did last year. She was pretty strong all the way through,” Eric said.

Cameron will not make a decision on her junior-season playing-status until next summer.

“MSHSAA only allows you to play two events during the season, and you just never know what opportunities might be out there,” Eric said.

Leonard, who has been at the helm of NHS golf program for nearly two decades, said that in just two seasons Cameron has become the top girls golfer in the history of the school.

“She’s very mature on the golf course, but is still a very young person in life,” Leonard said.

The only question remaining is whether or not Cameron will square off for a rematch with Edgeman at the 2023 state tournament.

Editor’s note: Matt Resnick is a reporter for the Chanute Tribune. He can be reached at matt@chanute.com.