When former Joplin running back Isaiah Davis was deciding upon which collegiate program to commit to ahead of his senior prep season, he chose South Dakota State because he knew it was a perfect fit for him.

Following an incredible freshman season with the Jackrabbits, Davis never wavered in his commitment to SDSU even though the transfer portal was available to him if he wanted to use it.

“To be honest, transferring wasn’t something that ever crossed my mind,” Davis said. “I love SDSU. They gave me my opportunity to play college football. It is a great system with great coaches and great players. I have built a family here and I don’t want to lose my family.”

Looking back, Davis’ freshman season was a whirlwind. He started the year as the backup to incumbent running back Pierre Strong before an injury opened the door for Davis to get significant playing time. But, Davis says the offseason leading up to the regular season, which was moved to the spring due to COVID-19, including the first couple of weeks of the season, was invaluable in terms of experience in needing to prepare for the rigors of college football.

“It was very important,” Davis said. “High school is a lot different than college, but you don’t realize that until you go through it at full speed. It was a lot different, especially in practice. It was great to get a feel for the speed of the game at the college level.”

Davis also noted that not only is the speed of the game much faster at the college level, but everyone on the field is focused on the game of football and how to beat you, which was not always the case at the prep level.

“In high school, some players are out there just having fun and other guys are trying to go somewhere,” Davis said. “In college, everyone is there for a reason. Everyone is trying to get paid, get a scholarship or whatever it might be. Everyone actually has a purpose.”

Being a true freshman, Davis was well aware what his role on the team would be. His coaches were upfront and as honest with him as possible, which he respected.

“To be honest, coming in, I didn’t know what to expect,” Davis said. “I asked my coach several times what my role was going to be and what I should expect? He always told me ‘Pierre has been here and it’s his turn, so you are going to be his backup. When he needs one, you’re going to give him a blow.

“So, that is what I expected, and the first couple of games—that is how it went. Then I had an opportunity in the third game against Western Illinois and I feel like that is when I started to gain the coaches’ trust. From there, my reps started increasing as the year went on.”

Davis made his first true impact on the field in Week 3 against Western Illinois when Strong left with an injury. Davis entered midway through the first half and finished with nine carries for 118 yards, including a 40-yard touchdown run.

“I figured that was my opportunity,” Davis said. “Some people get their opportunity later in their career and some get it early in their career. I was blessed to have an opportunity at such an early stage—Game 3 of my freshman year—I just wanted to take advantage of any opportunity I had. If that meant showing out in practice against the scout team or doing it in a game when we are up by 30 to see what I can do against a good defense, that is what it is. I just wanted to take advantage of any reps I could get in front of the coaches.”

“It definitely gave me that belief in myself, “ Davis added about his Week 3 performance. “You say you believe in yourself but until you actually do it and know you can do it, it’s a whole different kind of belief. For that experience my freshman year, I will always be able to have that confidence and belief for later in my college football career. If adversity hits, I know I’ve got this and have done it before and I damn sure can do it again.”

While Davis had his breakout game in Week 3, it wasn’t until his first start of the season in Week 5 against Southern Illinois when his confidence grew immensely. He finished as the game’s leading rusher, totaling 150 yards and three touchdowns on 22 carries, earning himself Missouri Valley Football Conference Newcomer of the Week honors.

“I never doubt myself, but I would say the real confidence booster for me was in the third or fourth drive the first time we played SIU,” Davis said. “That was my first game starting and on the first drive I had a couple carries and the defense was talking to me, calling me a freshman and all that nonsense. That third drive I had a couple of (good rushes) and from there I was like, ‘OK, I got this.’ … That was the game that made me realize I could do this and I was meant to be here.”

Davis, who had 81 rushing attempts at the collegiate level before being tackled for a loss, went on to have an incredible freshman season for the Jackrabbits. He was the recipient of the Adam Timmerman Award for the team’s top offensive player while leading SDSU with 818 rushing yards and 10 touchdowns in 10 games. More importantly, he helped lead his team on a deep postseason run which ended with a 23-21 loss to Sam Houston in the FCS National Championship game. And while Davis led SDSU on the ground with 14 attempts for 178 yards and all three of the Jackrabbits’ touchdowns, including a vintage 80-yard touchdown run filled with broken tackles and a stiff arm from Hell, the aftertaste of losing in the national title game did not sit well with Davis and most of his teammates. In fact, they are using the close to 2020 as motivation to reach the ultimate goal in 2021. 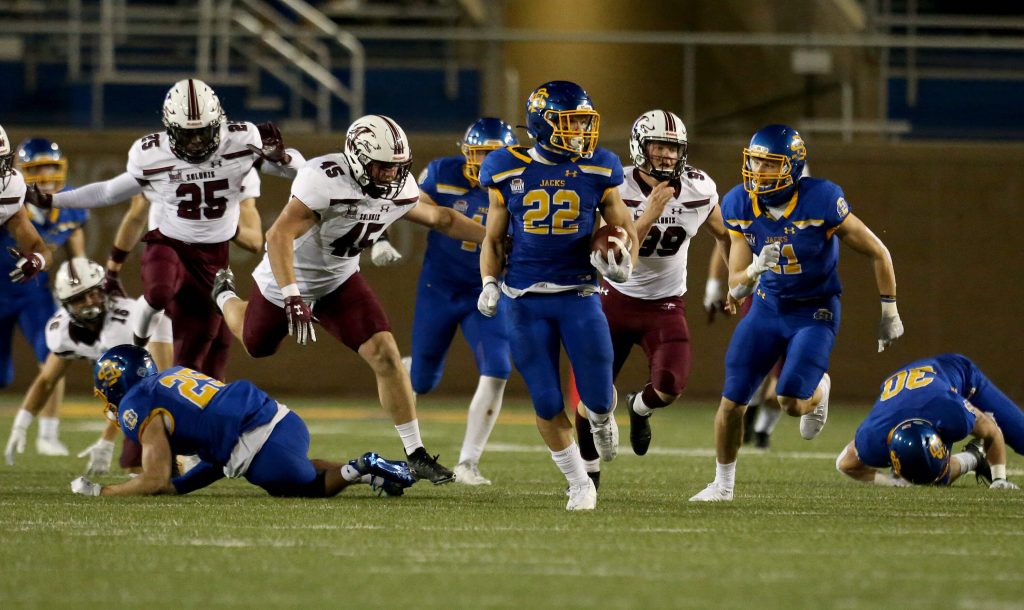 “It was something I will always remember,” Davis said of his team’s postseason run. “How I look at it now, that whole season was fun but it didn’t mean anything. Our final goal was to win the championship, and you can say we went there but that doesn’t mean anything to the players who played. Obviously, it was a fun experience to be out in Frisco (Texas) and play on national TV. But to us, we worked the whole year to finish second.”

“It gives you more drive and purpose,” Davis added. “For me, I have been so close twice to a ring and a championship—my senior year in Joplin and then my freshman year at college. It lets you know you are almost there and you can do it. A lot of the guys felt that the whole season was fun, and we had a great time making memories, but our goal was to win a national championship. Coming up two points short, it was like we did all of that for nothing because at the end of year all that matters is if you get the ring or not. That is what we are working for.”

It is a quick turnaround for Davis and South Dakota State, who wrapped up the 2020-21 season just a few short months ago. Strapped back up for the fall 2021-22 season, the Jackrabbits kick off the season with a 7 p.m. matchup at Colorado State on Friday. And for Davis, it truly is an honor to know so many people back home still have him in their hearts.

“It’s amazing to know I still have so many people from the community behind me and supporting me in everything I do,” Davis said about the Joplin community. “Wherever I may be, it’s such a cool feeling to know I have so many people believing in me. Even if there are times I may not believe in myself, other people do believe in me. … It gives you so much more motivation to keep working, if not for myself then for people who actually care for me.”